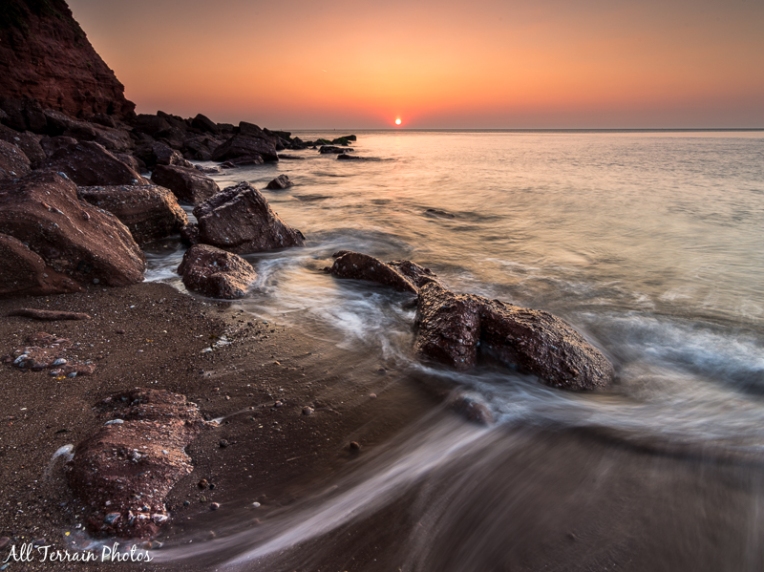 Ness Cove is one of Devon’s most secluded and picturesque beaches, completely enclosed by the shelter of the cliffs above. The secluded beach is tucked away, underneath the Ness Headland.

Access to the beach is through the intriguingly-named Smuggler’s Tunnel, which leads the visitor through the rocks of the Jurassic Cliffs out onto the beach. It is not clear whether the tunnel itself was ever used by smugglers however.

Wembury Seas, taken over Easter, on a trip down to Devon.  This end of day shot of Wembury, close to Plymouth was taken at the beginning of the long weekend . Unfortunately, there was little interesting cloud in the sky.  However, the rocks and sea were at least playing ball.

Last morning in Devon for a while and the weather was meant to be bad. As I drove towards Dartmoor the fog was think and almost impenetrable. I ended up getting lost on the moors after taking a wrong turn. However, once back on track, the fog gave way to clear skies around Haytor.

Leaving the car in the nearby car park, situated a short walk from Haytor,.  The imposing granite stack was covered in lichens and mosses, holding an imposing position over Dartmoor.  Apparently, these rocky granite outcrops, or tors, were formed over 280 million years ago. 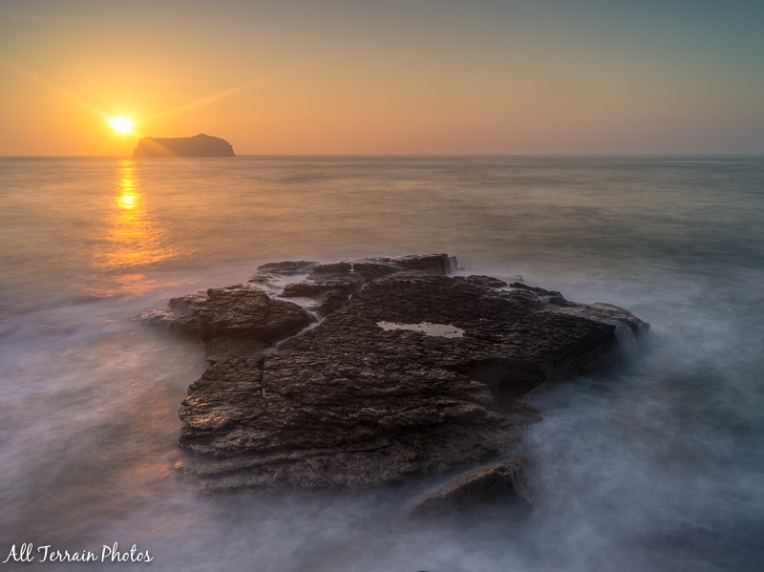 Hopes Nose, situated close to Torquay on the southern coastline of Devon, was not somewhere I had been before.  Fortunately, the light was decent and the tide was compliant, albeit somewhat frisky. From the water’s edge, Ore Stone island is visible below the rising sun. My daughter joined me on location for this shoot. It was a treat to share such a lovely view with her.

I was recently back down in Devon and took this opportunity to do a few early morning shoots of new places.

This one is of Daymark, in Kingswear Devon, which was built in 1864 by the Dartmouth Harbour Commissioners. It is a hollow, octagonal tower, 24m tall, constructed of limestone. It was built as a guide to mariners to the position of the harbour entrance and is visible for many miles out to sea.

At the end of my time in Cornwall and Devon this summer, I drove to a place called Sandymouth, a few miles north of Bude in north east Cornwall. The beach is a photographer’s Mecca, with rocks, sand, cliffs and westerly facing, so fantastic for end of day shots.

The tide was very high the day I visited and I would like to return when it has receded further, exposing more rocks and some sand.

Part of the Devon set from my time there in August. This was taken in Paignton, about 20 mins drive further south from Exeter than Teignmouth. Both towns have piers but Paignton was blessed with a more impressive sunrise the morning I was there.

This shot was taken moments after the sun crept over the horizon and was a long exposure as I was looking to create the illusion of a vanishing point aligned with the end of the pier.

The shot below was taken about 45 minutes later, from the other side of the pier. Again, I employed a long exposure to fill the vast sky with movement. The golden hour had past by the time I took this shot, with the cooler blue tones more apparent. 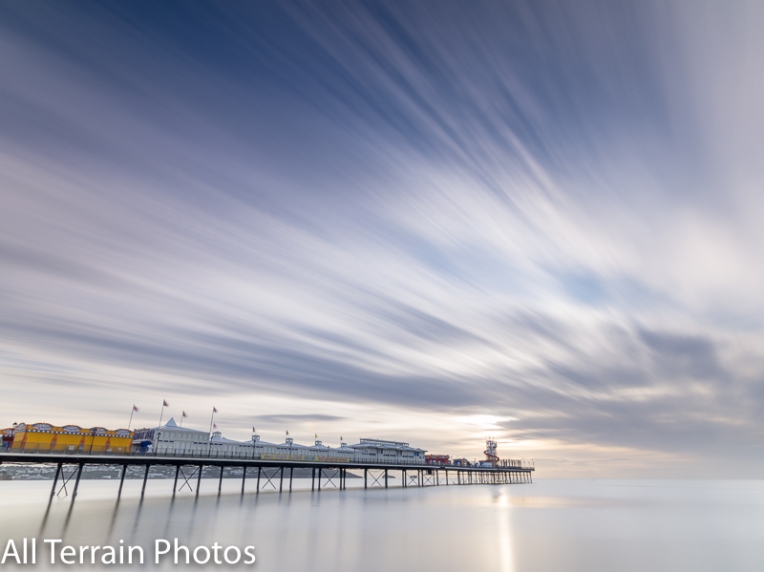 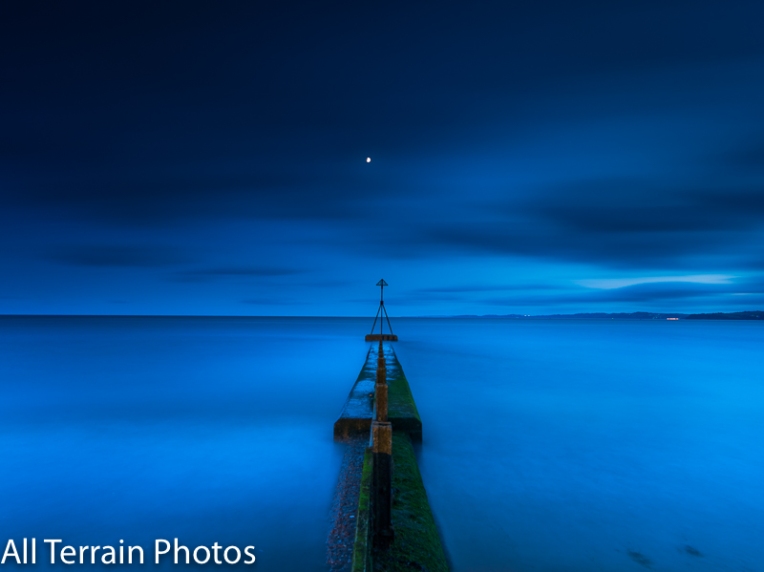 Exmouth beach, one of my favourite places to shoot, deep in the blue hour as the last remnants of the day concede to the inky blues and blacks of night time. This was well after sunset but the image of the moon almost perfectly aligned above the groyne gave this cool blue scene a sense of symmetry.

Taken a couple of weeks ago at Bantham Bay in Devon, the tide was receding, which allowed me to chase the water line without worrying about my footsteps. Unfortunately, there were no crashing waves on the rocks in the foreground.

As the light faded from golden hour to the blue hour, I took the shot below. The rocks on the right were already beginning to reflect some of the light from the rising full moon. 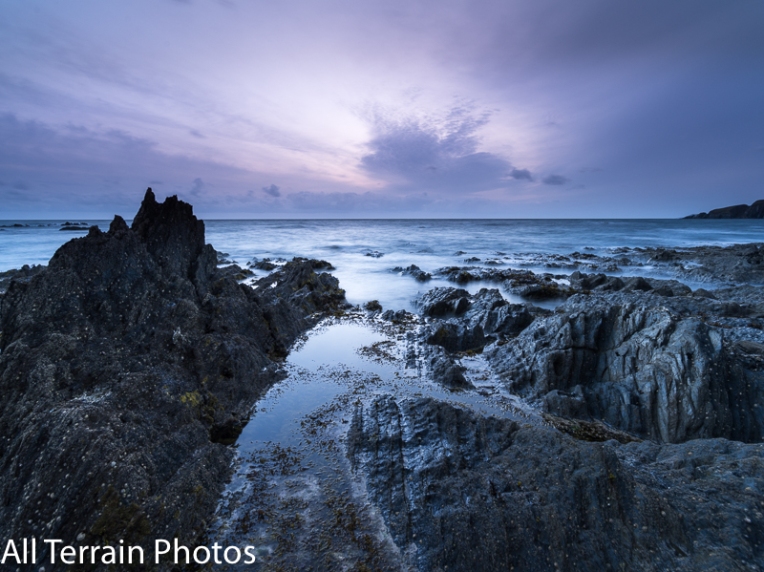